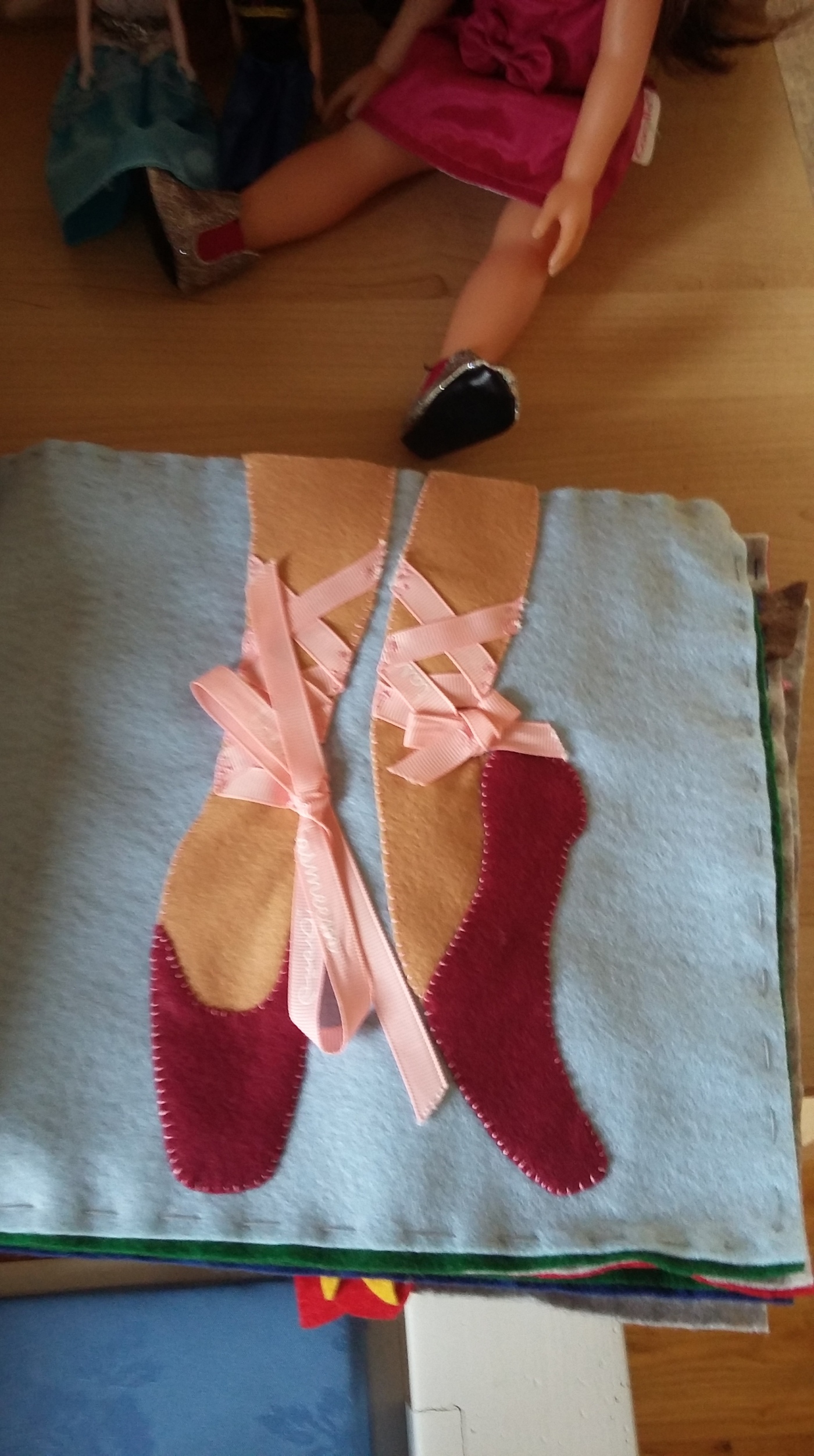 My niece is three (nearly four). She is bright, dramatic and funny… and constantly doing something – making up games, painting, drawing, playing dress up, going out on her bike; she’s constantly up to something. Also, because she’s nearly four, that means she’ll be going to school soon, so being able to do her own shoes, button a shirt etc. will be really useful (for my sister if nothing else). This information, coupled with a love of felt, a cheap shop to get it from and too much time on my hands, is why I decided to make her a ‘quiet book’. Actually, I prefer the name ‘busy book’ so that’s what it will be :).

I started off by mapping out what I wanted to do on each page. I used Pinterest as a starting point for ideas and then tried to make them personal to her actual interests. What’s the point of me hand-making her something without making sure it’s just for her?

So, instead of a pair of shoes with the laces to practice tying her own shoes, I did a pair of ballet shoes and she has to tie the ribbon into a bow. I know, I think totally outside the box. I also did an ice cream cone with different ‘scoops’ that built into a tower, all fixed in place with buttons. So she can practice buttons (which she’ll need to do for her school shirt), and match colours, and generally play around with what ice cream ‘flavours’ she fancies!

Then, I made some little owl finger puppets, because she likes owls. Or, maybe I like owls and so she does. I’m not sure, but owls are a theme. I made two big ones, and two baby ones, and a little ‘nest’ for the little ones to sit in. The big ones had hook and eye attachments so they could perch on branches that made up the background of that page.

On another page I decided to introduce her to noughts and crosses. So I made a simple 3×3 grid using ribbon on one page and an envelope on the other with felt noughts and crosses inside. I liked this one because it was fairly simple to do, after the fiddliness of the owls. By this point in the project I’d stabbed myself more times than I could count and fully sewn through my finger, so I needed a bit of light relief!

Another page was dedicated to using zips and poppers. So there was a ‘space’ scene (which I could have done much better) with a planet, a rocket and an alien. She can pop the rocket and alien off and change them round, and make up whatever crazy games she likes with them. The ‘scene’ was covered with another piece of felt which she has to unzip to see what’s underneath. This page caused me way more stress than it should have, for how simple it looked in the end. I managed to sew the planet on the wrong way round (the pages were rectangular and I forgot and I just sewed it on sideways) – twice – not to mention glue my finger to a piece of felt. With superglue. I had a slightly green furry thumb for about three days afterwards.

Actually, as I recall all this, I’m genuinely surprised that I get anything finished! And without (serious) injury. When I’m sewing, particularly if I haven’t done any for a while, I constantly have to catch myself as I go to stab the needle into my leg for safekeeping when I’m done or when I’m sorting out the thread to rethread it. It’s a little bit like that weird feeling you have when you’re up high somewhere and you think you’re going to jump, or fall, just because you’re thinking how high it is. I look for somewhere to put the needle so I don’t lose it, and my brain goes, ‘hey, well, your leg’s right there.’ Yes brain, but so is the sofa, the cushion, the spare material, the table…in fact an array of things that would cause me no physical pain to stab a needle into! I never do, by the way, it’s just a repetitive oops, no! moment. As I’m writing this I have a visual of some little gremlin in my brain, getting more and more frustrated each time I don’t cause myself an injury. It seems like a viable explanation. Does anyone else have that with stuff? It can’t just be me. That would be embarrassing.

So I’ve glued myself to an alien, sewn through my own finger and nearly stabbed myself about 42 times…

Next, I find some mini pegs in my favourite cheapy shop and decide my three (nearly four) year old niece needs a washing line and laundry basket in her Busy Book. Helping with the laundry is something she actually likes to do. Along with dusting when she’s at Nana’s (wafting the feather duster about) and of course, tidying (causing me an aneurysm as she ‘tidied’ the suitcase I’d been living out of for five weeks – there was a system). I think helping peg the clothes out probably has more to do with the volume of pegs and being in charge of what colours to use, than a love of household chores. Hence, she got a mini clothes line. With mini clothes. And mini pegs. And it’s a-dor-able!

For the front cover I sewed her name on in big felt letters, just in case she forgets it. The pages were sewn back to back to hide any mess, and then the whole book sewn together along one edge. This caused another delay as I ‘cleverly’ sewed just three sides of each page, because I knew that when I put the whole thing together, the fourth edge would be closed off. For future reference, this only works if you sew the correct three sides in the first place. Or, more specifically, if your helper does. Yes, I enlisted a helper again! But just for this last bit! I was finishing it off before going back to the UK and wanted to take it with me. I was actually waiting for the taxi to the airport and putting it all together at the same time

My mum actually said (in all seriousness and I did do a sarcasm check) that she admires the way I just get on with things and get them done. I pointed out that if that was the case, wouldn’t it have been finished in the ample time I’d had during the previous two weeks?! Maybe this explains why I’m always rushing round doing things last minute – parental reinforcement that it’s a good thing! 😀

All in all I was pretty happy with the result. If I did it again I’d put more pages in, and more little games, and a jigsaw (I kept forgetting to get Velcro for the jigsaw…).

Now I just need to make one for my nephew. Whose nicknames include ‘terminator’ and ‘the destructor’ due to his love of taking things apart just to see how they work (he’s 18 months old)…I feel it may look a little different to my niece’s! 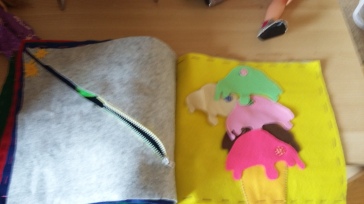